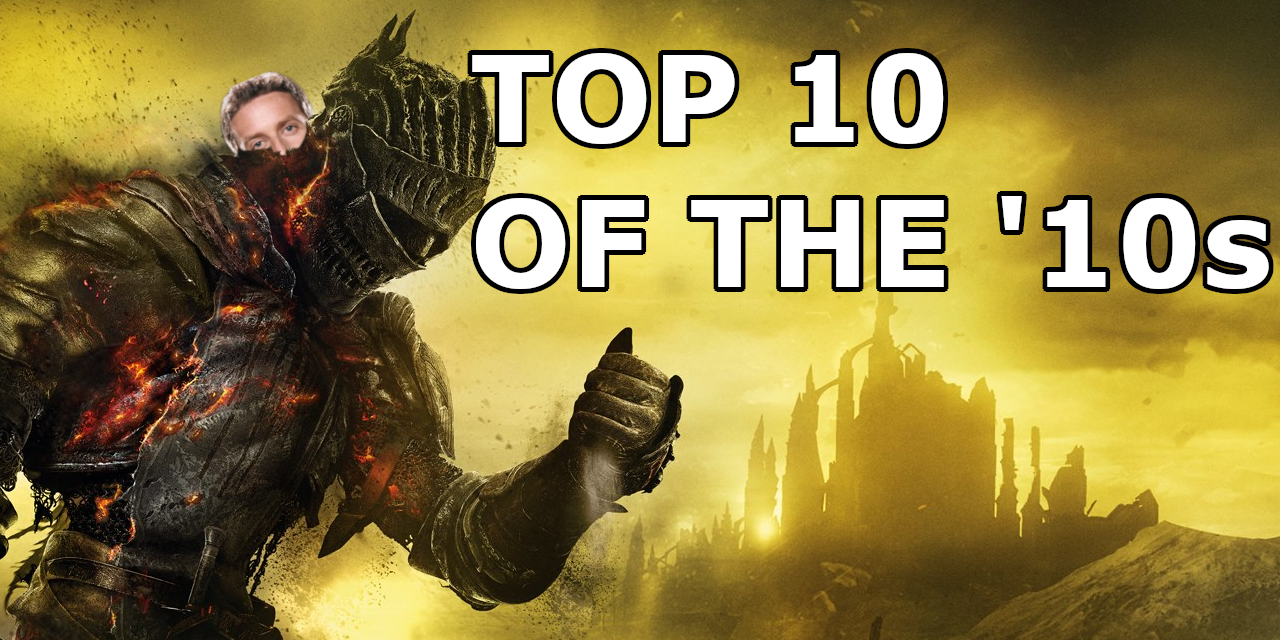 2010 feels like like an eon ago, and in the world of gaming, that’s basically true. Modern military shooters were at the height of their popularity, while trends like MOBAs, hero shooters, and battle royale had yet to emerge. Minecraft was just getting started, and the early access wave along with it. Dark Souls had yet to revolutionize action RPGs and spawn a wave of imitators. Team Fortress 2 was still relevant, Mass Effect was still good, and hope of Half Life 3 was still alive.

And so, with everything that’s happened since then, it’s time to take a look back at what really stuck out from the last ten years. The trendsetters, the big hits, and the unexpected gems. This was not an easy list to make, with a shortlist that was anything but, but I think I’ve come up with a top 10 list here that will really define the decade going forward.

Keep in mind, of course, none of these objective and they’re all just my opinion. I’m honestly not sure why I even have to drop a disclaimer like that, because you’d think it’d be assumed, but it seems expected enough that most people who make videos like these feel obligated to drop it anyway. I think, if pressed, most people would also say that they understand that lists like these are entirely subjective, but it’s when you look at the responses to game of the year awards, which are basically the same thing as top of the decade lists, where you start to see where the community really stands on stuff like this.

Personally, I blame the Oscars. It’s easy to forget that the Academy is just a bunch of people picking their favorite movies when they present themselves as the yearly official movie awards. That attitude has sort of bled out into other media where people have this bizarre expectation of “game of the year” meaning literally anything besides what that person or group of people giving the award liked the most that year. It’s sort of a mix of most influential, and that ever-dreaded measure of “objective quality”.

Of course that criteria is nonsense, and as proof you can simply look at comment responses to literally any award show ever, big or small. You’d think a relatively impartial criteria for best game of the year or decade would mean that the choice would be fairly uncontroversial, but no. “Wow, how could this one game get snubbed, what idiots.” “This guy is just being contrarian with this choice.” “They’re so out of touch.” Et cetera, et cetera.

What really bothers me about this pattern of behavior is that it seeps into people’s everyday appraisals of games and leads to them not giving due credit to what really moves them. When people give games their own rating out of 10, it’s usually some unholy mixture of their own personal enjoyment and how “objectively” good it is (though sometimes this is disguised as a “technical” appraisal). You ever hear someone say “I personally consider the game a 9/10, but it doesn’t really deserve that, it’s got some issues”. What is the point of an individual person rating something if your rating is based on anything other than what you personally think of it?

An argument could be made that a perspective like this is what reviewers need, since they’re trying to appraise a game as a product, as value for money. But if you think game reviews are objective, you’ve really got another thing coming. Besides, A) you’re not a reviewer, and B) personally, it’s this commitment to some degree of objectivity that has really driven me away from game reviews. Game critiques, or examinations of more specific aspects of a game through an individual person’s unique perspective are, to me, orders of magnitude more interesting, because it creates a sort of metanarrative above that of the game itself, and as a result, you end up with this tapesty of many people’s views on the game coming together as a sort of secondary work of art above that of the original work itself, if you’ll excuse me momentarily sounding like a high horse-riding prick.

When you abandon this faulty idea of some choices for game of the year or decade being more “proper” than others, you realize that the idea you left behind was unfairly biased towards certain types of experiences. Anything serious, dramatic, contemplative, or otherwise Oscar bait in video game form felt like a more natural choice for high praise while puzzle games, horror games, or something with a more simple or joyful appeal would usually wallow in lack of recognition. Well, unless it’s made by Nintendo.

This isn’t to say that we should adopt a completely relativistic approach, of course. Nothing’s more annoying than that guy who says “I know, everyone has different opinions, CRAZY, amirite?” and expects that to be the end of the discussion. Such a statement, as I indicated earlier, should be the assumption that we have going in. From there we are free to give our own appraisals of the value of different works, and maybe change some minds, or maybe not.

I mention this because, other than that attitude being a big pet peeve of mine, some might dismiss my gripes about awards shows by pointing out that all they’re doing is adding their opinions to the pile. And that’s true… when it’s just individuals.

But there are those that seem determined to bring that Oscars attitude into gaming. The big one being, obviously, the somewhat arrogantly titled Game Awards, but there’s a reflection of the same ethos in the magazines and other publications. And I really just don’t like it, because for all the recognition that they grant, there’s so much lowering of the discourse around them, because what kind of response can you give, other than “that choice was good” or “that choice was bad”?

And that’s kind of the heart of it here. These awards shows and lists, the way that they’re frequently done, are an evolutionary dead end of critique. That disclaimer that everyone gives, that their lists are only their opinion, I think exists because these awards, as a genre, sit so close to the idea of objectivity and that disclaimer is kind of the only barrier that keeps the discourse around it from completely tanking.

So really, are game of the year/decade awards even worth it? I wouldn’t say they’re worth all the hype, at the very least. Despite the bait-and-switch snarky nature of this whole video, there’s nothing wrong with people putting their own picks out there, even other youtubers. It can be a fun thing to do. I’m personally a fan of Jim Sterling and Yahtzee Croshaw’s lists, particularly the “worst of” lists that give them one more chance to stretch their creative muscles and give one last spanking to those games that truly deserve it. And while this is outside of video games, I’m enjoying Digibro’s Top 50 Anime of the Decade videos, since he has the somewhat unique perspective of watching absolutely goddamn everything because he’s a huge otaku weirdo.

But bigger publications, especially flashy shows like the Game Awards? Sorry Geoff, but I’m not really feeling the impact on the cultural landscape on this one. Recognition for great games is, well, great, but making it into a big, officialized event – especially literally calling it “The Game Awards” – only amplifies the biggest problems with the attitudes underlying this practice.

It’s just all so tiresome, the sort of non-discussion that awards shows tend to bring about. It’s either a bland WatchMojo-esque listing of favorites that does nothing more but remind us that these games were probably good or the exact same as the former, but presented in a glitzy, Oscar-like manner that gets people arguing about everything except what’s actually important. Even responses to the sorts of awards shows I like are just congratulating perceived “right” picks or decrying an omission.

I realize that this is the sort of thing where you’re really meant to be the change you want to see in the world. But I don’t think that this is a formula that can be elevated beyond simple entertainment, really. I want to say “so I’ll stick to what I do best” but I doubt this shit is what I do best. Still, I’ll do what I can to try to elevate the discourse.

And with that out of the way, without further ado, here are the picks!

And probably Disco Elysium in there somewhere, I haven’t finished it yet.