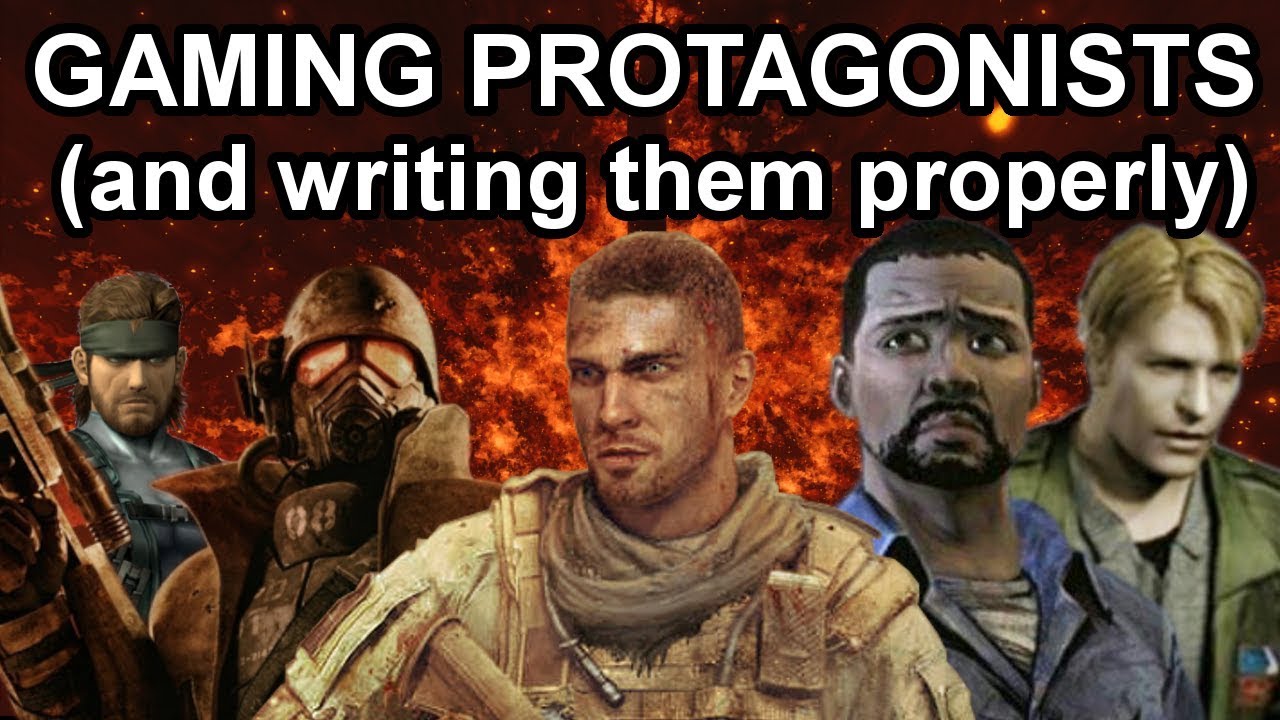 The medium of gaming has a strange relationship with traditional ideas of writing. Think for a second about your favorite video game characters, stripping away more surface-level attributes like design and the world they’re a part of and focusing purely on how they’re written. my answer to this question might include the likes of Garrus Vakarian, GLaDOS, sans, and others. I’d wager, though, that many of your answers are not the main characters of their respective games. The medium has no shortage of iconic main characters, sure – from Mario to Master Chief, but compared to other characters, even from their own games, many of them are barely characters at all. Instead, in so many games you end up piloting something of an empty shell, while all the other characters get to have proper arcs. In this video, I’m going to examine where game protagonists are now, and where they could be in the future. First though, let’s back up and attempt to justify what I mean by the empty shell protagonist.

One of the more important parts of character writing that gaming tends to struggle with is the concept of choice. You can primp up your character with nice design, a likeable personality, and memorable quirks, but when it gets right down to it, you get to know a character best when you present them with a decision that in some way challenges them. It can pit two or more of their priorities against each other, make them question their values or relationships with other characters, or any other number of things. Video games can typically portray this as well as any other medium, but when it comes to the player character, things get much more complicated, because the writer isn’t always in full control of the character’s actions. We’ve got another element in the mix – the player controls this character to some extent, and they may not always go along with the writer’s plans.

Game protagonists are pretty varied in how much control the player has over them, but we can think of them as being on a sliding scale depending on how much the player defines their character, leaving out silent protagonists and other non-characters. On the left side we have characters who are entirely player defined. At its absolute purest, this would mean pen and paper roleplaying games like Dungeons and Dragons, which allow for truly open-ended roleplaying. In the realm of video games, the absolute furthest we can go is the more open CRPGs like certain Fallout games and Planescape: Torment and a whole bunch of other games that I haven’t played. They may have a barebones backstory that places some broad restrictions on what kind of role they can fit in the world, but the important thing is that their personality and relationship with the world is entirely up to the player. Indeed, the entire point of many of these games is to construct a character and interact with the game’s world in a way that fits their personality.

I was never much one for the visual arts

These characters, in theory, could be greatly complex, but they could just as easily be rambling automatons that act with little rhyme or reason. By putting the onus on the player to create the main character, the writer is able to put their focus on the world and make it as reactive as possible to the player’s choices. This has the potential to be great, and for some players, that’s all they really want, but it has some limitations. Primarily, the world can only be so reactive. it’s impossible for the writer to think of every single possible thing you could do. It also requires significantly more effort on the part of the player to keep things engaging, which not everyone is into.

With that in mind, let’s slide over to the middle of this scale. We’re still looking at characters that give the player agency in defining them, but now the writer places more restrictions. This is where we find the likes of Commander Shepard or Geralt of Rivia. Our main character now has a much more defined role in the world and the story, but it’s up to us to decide how exactly they fill that role. This can be nice for a player that wants to make their own path but doesn’t necessarily want to do everything themselves. On the other hand, having two people at the wheel has the potential to make things a bit bland. Games in this region tends to have binary moral choice systems, and more often than not you have a main character that’s not strongly associated with either, since they have to pull double duty. Even in games with intricate plots and worlds, the main character ends up as little more than a vessel to move the plot along.

And then there’s the far right side. These are the video game protagonists that come closer to the more conventional definition of a character. James Sunderland from Silent Hill 2, Solid Snake from Metal Gear, basically every JRPG protagonists. Really, this list is endless. THese are all defined entirely by the writer, and their personality is largely conveyed through cutscenes or voice-over dialogue. This doesn’t involve the player at all, but allows for much more nuanced character definition, and even allows strong use of choice in the narrative.

And that’s great! It works. We’ve gotten plenty of good characters out of it.

What else you got?

We can do better than this, right?

These sorts of protagonists are less bland, but there’s a bit of a separate problem going on. The thing is, they’re playing by old rules. The rules of other media. Rules that work quite well, mind you, but with gaming being such a young and growing medium full of possibilities, I can’t help but think that we’re capable of something greater.

So every part of this terribly reductive scale of mine has some problems. Still. The middle section here is particularly interesting because it’s the only type of protagonist that’s exclusive to games. Since video games are already something of a marriage of role playing games and more traditional media, maybe our protagonists should follow suit. It calls for more effort, especially in more choice-centric games, but it presents an opportunity for creating an experience that only games can provide, even if the narrative doesn’t branch as much as you’d want.
But maybe we’re overthinking this. Maybe a main character doesn’t always have to be dynamic. In any other medium, you can still make a static character endearing by ramping up the characterization, and that’s a realm where video games are actually quite capable. We spend so much time with these character that there’s space to jam personality into every little aspect of their design or behavior. This is a favorite of multiplayer games, and certainly a factor in the runaway success of games like Overwatch.

When your game doesn’t have a linear narrative, it doesn’t make sense to have your character develop, but there are so many other ways to bring across personality. Design is obviously a big part of it, but there’s also voice lines, animations, and even the specifics of how a character plays. That last one is especially potent when you consider that one of the greatest storytelling devices video games have is using mechanics to get the player into a particular mindset. Examples and examining the particulars of this could probably take an entire video, but one easy one is the connection between death and hollowing in Dark Souls. In that universe, an undead that dies over and over and over begins to lose their grip on reality, while an undead that has something to live for can press on. Dying to a boss over and over and over sure can feel like you’re going hollow, but it’s that tantalizing thought of finally shoving your broadsword up their ass that keeps you going.

Putting this all together, let’s envision the hypothetical perfect video game protagonist – someone that takes from all these ideas of traditional chracterization, storytelling through mechanics, and some degree of choice. This is a character whose personality is expressed narratively, visually, and in how the game plays, with the player having a hand in defining the character while the game in turn elicits a certain mindset from the player.

Now obviously I haven’t played everything, but one character that immediately comes to mind as coming pretty close to this idea is Captain Walker from Spec Ops: The Line (try to overcome your shock at a game critic praising Spec Ops). Walker has a pretty clear arc as the horrors he faces change him from an idealistic soldier to a brutal and desperate war criminal. A lot of his portrayal can be attributed to the lead writer, Walk Williams, having a much higher degree of control over various aspects of the project than most writers do. That’s why you see his trigger discipline degrade, his combat lines become more brutal, and his appearance becomes more weathered and beaten. As for choice… well, here’s something Williams himself said in an interview with Giant Bomb. Vague spoilers for Spec Ops ahead.

The man, the myth, the horribly depressing

“There’s a certain aspect to player agency that I don’t really agree with, which is the player should be able to do whatever the player wants and the world should adapt itself to the player’s desire. That’s not the way that the world works, and with Spec Ops, since we were attempting to do something that was a bit more emotionally real for the player. […] That’s what we were looking to do, particularly in the white phosphorous scene, is give direct proof that this is not a world that you are in control of, this world is directly in opposition to you as a game and a gamer.”

Some criticize Spec Ops for its most pivotal moment being railroaded. While I do think there are some interesting aspects of choice in the game, particularly in deciding how Walker ultimately handles the events of the game, what Williams is speaking of here is a deliberate defiance of gaming storytelling convention. Specs Ops largely follows those rules I came up with for a great gaming protagonists, but the point of choice is one that it made a very distinct point of breaking, because that’s what worked best for its narrative. In a way, the idea of making new rules for game storytelling recurses on itself – break old writing rules to make new ones, but sometimes it’s those very rules that need to be broken.

One of the things that makes games interesting as a storytelling medium is how its narrative mechanics are unlike anything else that currently exists. A game that tells a traditional story might as well be a book or a movie where you periodically take breaks to shoot some dudes or solve some puzzles or whatever. Most of us have gotten to grips with the fact that those bits can serve the story, but what makes things more complicated is how the deeper you go into that gameplay and story connection, the less old methods work. So if there’s any point to this overly long diatribe it’s that that we’re still, to a degree, in a time of experimentation in video game storytelling. You can get along just fine by playing it safe and sticking to old rules, but if you try to make your own rules, you just might end up with something incredible.